Here you can find the technologies we develop and tools to implement them in your lab.
Please contact us if you are interested in applying one of these tools and need our help. 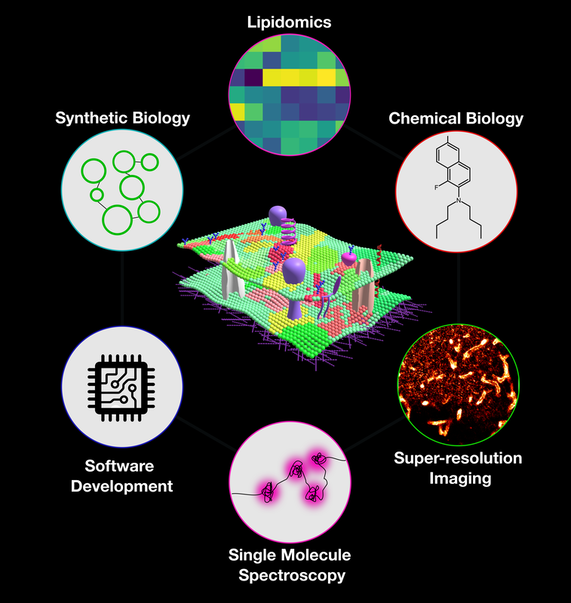 Spectral Imaging
Physicochemical properties of the plasma membrane are regarded to play an important role in cellular functionality. Among those properties the molecular order of the lipids, or the lipid packing, are of high importance, since this may introduce coalescence and conformational changes of proteins. A common way to infer membrane lipid packing is through using membrane-embedded polarity sensitive dyes, whose emission spectrum is dependent on the molecular order of the immediate membrane environment.
We here show that such spectral analysis on a scanning confocal fluorescence microscope can significantly be improved by using detectors capturing the full emission spectrum and applying an analysis that regards the whole spectrum. Using polarity sensitive dyes such as Laurdan or Di-4-ANEPPDHQ, you can accurately measure spatial heterogeneity in lipid packing of model and cellular membranes, revealing in great detail in these physicochemical properties of the plasma membrane.

Fluorescence Correlation Spectroscopy
Fluorescence correlation spectroscopy (FCS) is a commonly used microscope-based approach to probe the mobility of fluorescently labelled molecules. In FCS, the autocorrelation function is calculated from the temporal fluctuations of the fluorescence intensity that are caused by transits of individual molecules through the microscope’s observation volume (Figure 1b). The autocorrelation curve can provide information on the concentration and brightness of the diffusing molecules. Most importantly, it reveals the average transit time tD through the observation volume, from which the diffusion coefficient D can be calculated. 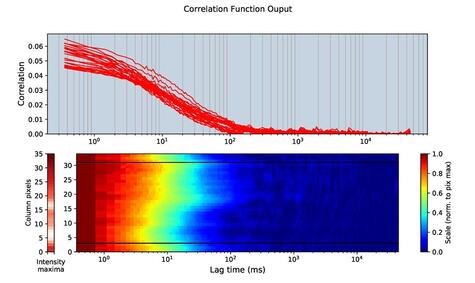 Scanning FCS
In sFCS, the observation spot is rapidly scanned along a line using a fast beam scanner. For each pixel on the line which represents a different point in space, an FCS autocorrelation curve can be calculated by temporally correlating the intensity signal in the very same pixel over time. These sFCS measurements can be performed in standard confocal microscopes and the correlation curves over space (so called correlation carpets) can be generated to infer on the general diffusional properties of the molecule of interest. 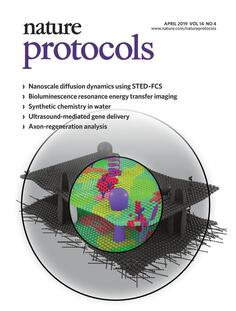 STED FCS
Spatially heterogeneous diffusion behavior is often caused by molecular interactions that occur at spatial scales smaller than the resolution limit. Consequently, FCS performed on a conventional confocal microscope (i.e., with d≈200 nm) may miss this heterogeneity because of inherent averaging over the entire observation volume. FCS can, however, be performed using sub-diffraction-sized observation spots on a STED microscope. FCS data recorded for varying STED laser intensities yield values of the apparent diffusion coefficient as a function of the observation spot sizes. This dependence of diffusion coefficient on the observation diameterd is generally referred to as the "diffusion law", and it reveals the heterogeneities in nanoscale diffusion.

Giant Unilamellar Vesicles
In aqueous environments, lipid assemblies are easily transformed morphologically by changes of the physical parameters in the solution. Mild fluid convection, but also slowly alternating electric fields can lead to the vesiculation of a flat lipid multilayer, allowing the formation of unilamellar vesicles much larger than those prepared by sonication or injection methods, termed Giant Unilamellar Vesicles (GUVs >1000 nm). Originally, GUVs were formed using DC electric fields (Angelova and Dimitrov 1986) though AC electric fields were later found to increase formation efficiency (Angelova and Dimitrov 1988). Besides having a great potential to selectively study single lipid species in a model membrane, it is also possible to form GUVs with complex lipid mixtures. 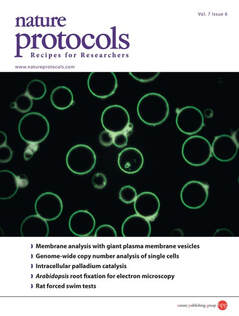 Giant Plasma Membrane Vesicles (GPMVs)
Although non-lipid cellular components (such as functional membrane proteins) can be reconstituted into GUVs, these experiments are rather work-intensive and still only capable of reproducing a limited complexity, compared to the physiological situation. This is particularly true for the extensive variety of lipids in a native cellular membrane. An optimal complement to simple GUV models is a free-standing membrane which retains at least the compositional lipid complexity of a live cell membrane. Such a system is provided by so-called giant plasma membrane vesicles (GPMVs), which can be grown and harvested from native cellular membranes (Sezgin et al. 2012).
GPMVs can be used as model cell membranes at thermodynamic equilibrium. They retain most of the protein and lipid complexity of the cell membranes. Moreover, liquid-liquid phase separation can be observed in GPMVs, making them an excellent system to study cell membrane structure.